What Do You Do With the Failures (Part 2)? 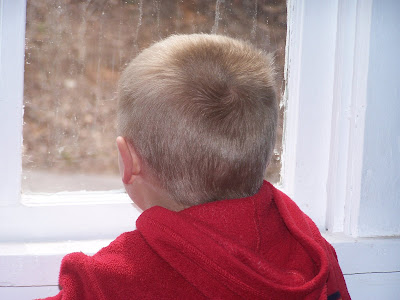 One way to fix the failures is to wipe the tears and start right where you are with what you have. I have had to do just that this past week. If I sit around crying, nothing will be accomplished. I don't have time to waste, and if I cry a bucket of tears it won't change the situation. The only way I can change it is first, learn from my mistake, and second, start NOW.

Our youngest child is very smart. He learned his shapes, colors, and letters VERY quickly. It was almost effortless to teach him these things. Towards the end of his fourth year, I started to teach him to read. I quickly realized that there was something terribly wrong. He wasn't grasping any of it. I assumed that I had just gone too fast and I went back to working with large flash cards. I assumed that he just didn't like to sit still because he could only work for about 5 minutes at a time. I wondered if he might need medicine to help him, but truth be told he wasn't out of control. He just wasn't interested. He had never colored a picture, and he didn't like to play with small toys. He would beg for us to buy him a hotwheel car, but he NEVER played with them for more than a few minutes at a time. I assumed he was just a boy, and that he would grow into these activities with some time.

At the beginning of the new year, I decided to start working on his school with more effort. Again, to no avail. He KNEW the letters and the sounds. He could read them if I put words on flashcards and played games with him. The minute we switched to reading the same words from a real book, he wasn't interested AT ALL. He couldn't do it. I was so confused. He would sit still for me to read to him for hours, but he NEVER would pick up a book to look at the pictures by himself. We invited a family out to have lunch and enjoy the farm with us several months ago. This family has two little boys and after listening to her story, it confirmed some suspicions that I had concerning Seth. I made the appointment that afternoon.

Last week, we finally got an appointment at the eye doctor. I was devastated with the diagnosis. Seth was having a horrible time seeing. This goes way beyond getting a pair of glasses to correct his eye sight. There are muscle issues as well. Apparently by age 8, a child's muscle leading from the eye to the brain is at a fixed point. As with any muscle, if you don't use it you lose it applies. Seth's vision was so poor that his muscle quit generating images from his left eye. He just let his right eye take over and his left eye hasn't been functioning much. We have about 3 years to try to stimulate the muscle into functioning again. Along with the muscle issue, he also has a vision issue. He is terribly far sighted, and they can't make his prescription any stronger. If he where driving age, he wouldn't be allowed to drive even with his glasses because he doesn't see well enough. For the first time, everything was making sense with this child, and I felt like a failure as a mother. Why didn't I see it? Why didn't I put two and two together? As a mom and a teacher, I should have known better. I should have caught this several years ago. I felt like a failure for my child.

We went yesterday and picked up his new glasses. It was hard to see my little man with such thick glasses on his face. I was told that if an adult had this strong of a prescription, they would probably be throwing up within 30 minutes. They told me to watch him going up and down stairs. We went home and immediately he started asking questions that told me just how much he hadn't seen before now. He colored his first picture yesterday. He told him that he only got out of the lines 3 times. He took about 30 minutes working on his picture, and it was obvious he was proud of his accomplishment. With each new thing, I am so thankful, but I also feel that horrible guilt trying to creep up on me. I sat this morning at the kitchen table, and I felt the tears pour out of my own eyes as I watched him color. I know crying doesn't help so I take the moment that I wipe my eyes dry to remind myself that the Lord is bigger than all of this. He can take our mistake and turn it into good.

Our prayer is that Seth's muscles will start to function properly. As his muscles function better, then his vision should improve. We will spend the next few years making bi-monthly trips to the eye doctor. I covet your prayers as we walk this path with our child.

grace and peace,
julie
Posted by TnFullQuiver at 9:09 AM

Sister Julie! Let them be tear of joy!! You know what's wrong and he's not too late to get on board with being fixed!!! As I've been learning kids are REALLY complicated and because they are still learnng they can't explain what's wrong! There are a thousand and one reasons why Seth could've been so disinterested.... There's nothing wrong with him just his eyes. Your not noticing is no reflection on you as a mother or a teacher!!

Kids are so resilient and now that he's so excited by being able to see im sure that he's goig to want to strengthen his eyes too! Three years is tons of time an by the time he might be ready for more permanent treatment of his vision the medicine will be that much more able to help him! I'll certainly be praying for you guys!

Julie, lighten up on yourself. I have two boys with two very different sets of vision problems. I was a teacher, too, and I didn't catch everything immediately. But I am not a pediatric eye doc. You can't just look at a kid and determine what is an eye problem and what is a learning problem related to the child's likes, dislikes, learning style, or interest level. Plus, boys, on the average, learn to read slower than girls. Some people (who are not trying to make a killing off the education industry) think it would be better to let boys go till they are eight or nine before even bothering to try to teach them to read. Just way too many variables. You did the right thing when you saw what you needed to do. Good for you!

I would suggest ditching the flashcards. If you aren't already doing it, check into a plain phonics-first program like "Why Johnny Can't Read" or Hooked on Phonics. Reading is very simple. My older boy has three different muscle problems. These programs have worked best because he moves strictly left to right across the page rather than jumping around to decode like kids do in the more sight-oriented programs. The simpler the better.

You sound like a very good mom. Bet your husband thinks so, too. But we always get down on ourselves because we aren't God and all-knowing, don't we? Been there, too.

Julie, God has a plan. He is going to use all of this in your life, but also in your son's life to make him into that certain special person. Nothing is wasted and guilt and being down is not from Him. Praise the Lord it is now caught and you will be working with him.

God is refining us ~ all of the time!!
Praying for you and Seth's vision.

I'm sorry you, your son, and your family have to go through this hard season. I'll be praying for you all!

My bad eyesight was discovered by accident when I was in first grade. We were at the doctor for our annual checkups, and my sister and I started playing around, reading the eye chart while my little brother was getting his exam. She thought it was funny that I kept guessing the wrong letters, and went to Mom to tell her that I called an O an R. That's when we discovered that I had 20/200 vision. I had no idea my eyes were bad because, hey, I always looked through them and it always looked the same to me.

But boy, could I see a difference when I got my first pair of glasses!

Of course, that does explain why I was so bad at baseball.*grin*

Don't be too hard on yourself. You and Seth are in my prayers.

Sorry your little guy is going through this right now. I will be praying that things correct themselves. Your not the only one who does not see things now and then. I ahve struggled this year alot with my 6 year old and he just was not "getting" the reading. Turned out with him he just needed some glasses, but the behaviour I finally noticed had really been going on since last summer, lots of squinting and rubbing eyes and blinking. Geesh you would have though I would have figured this out before Feb of this year. Don't be too hard on yourself. Praying
Hugs
Amy