A Nice Appetizer or Side Dish 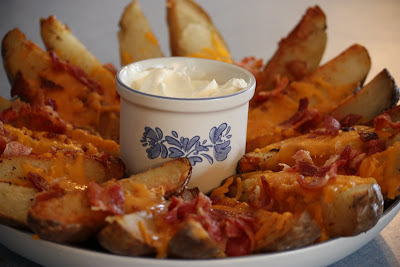 The other evening I thought all of my family would be around my dinner table. I made 9 large baked potatoes. I generally throw an extra one in the oven for leftovers for lunch. Our dinner was late due to a football game, and several of my kids had already eaten. I had 6 large baked potatoes left. A couple of days later I pulled the potatoes out of the frig and created a quick appetizer. First, cut the potatoes in half and then cut again. Each potato will result in four long pieces. Heat some oil in a cast iron skillet. Fry the potatoes until heated through and browned. Drain on paper towels and sprinkle with Kosher salt. I then sprinkle cheddar cheese, crumbled bacon, and chives. Serve with sour cream. This dish probably took me about 10 minutes to make because the potatoes were already baked. How is that for a quick appetizer for a household of hungry males?

Posted by TnFullQuiver at 8:46 AM

Oh boy...a real-man's man appetizer! Looks yummy! Were these some of your own, home-grown potatoes?

OH YUM! I always made my tater skins in the microwave (LAZINESS!) I never thought to use leftover baked potatoes, will definately try it though, thanks for sharing:)

mmmm, sounds great, I never thought about using leftover baked potatoes either, great idea to make ahead when there is an upcoming event!!! :)
PS, we have had our mastiff puppy for 3 weeks and he's awesome, growing like a weed, you were right about that shovel, ya never saw teenage boys so amazed at how big a pile of poo could be :)now if I could just get him to stop chewing on me, haha

Yep! That would definitely be a hit around my house!! I'll remember to bake a few extra potatoes next time. What a great quick lunch idea! Thanks,Julie!

Wow, what a great idea! I may try this for church for something a little different. We have three boys that love to eat, they will love this! Thanks for passing along all your great ideas!

Paige,
These are the first potatoes that I have purchased from the grocery store since we harvested our own. We didn't grow any large baking potatoes, but maybe next year I will give them a try.

bsadams,
Tell me more about your new puppy. I want to see pictures!!! Email me if you get a chance. Those puppy teeth can be a problem!


Pam,
You live in the same world as I do...well minus the grandbabies for me. Men love this dish. Give those grandbabies a big squeeze from East Tennessee!

Darleen,
All of my men children love this side dish! Hope yours enjoy it.

Oh I love that dish... Can I come over next time? You are such a good cook.

Cynthia,
You are more than welcome any time!! This would be great with your sliders!
grace and peace,
julie

For as much as I love to cook and read your posts about cooking, I hope to have as many sons as you!