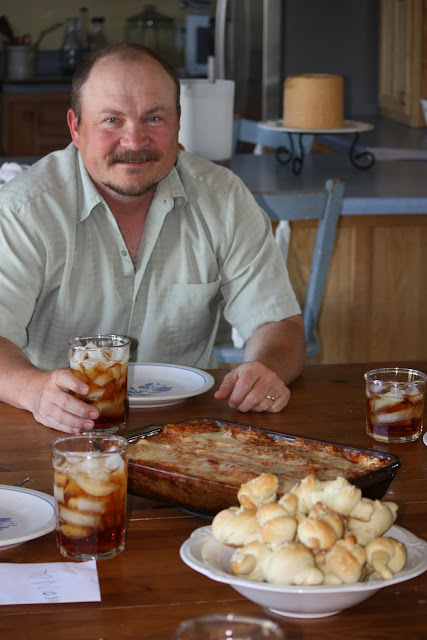 Several people have requested my lasagna recipe.  First, I must say that I make it different each and every time that I serve it. I don't use measurements as much as taste.  I just keep tasting the sauce and adding to it until it suits my desires.  This is only a problem when I share the recipe with others.  I am doing my best to be accurate, but you can change the amounts of the seasonings according to your taste buds.  This recipe makes 2 9x13 pans of lasagna.  I will often time bake one of the pans for dinner and freeze the other pan for later.  I have found that the lasagna tastes better if I freeze it BEFORE I bake it.  To use it, I let it thaw out in the refrigerator then I bake it until it is bubbly.  If I am serving a lot of people, I will use this recipe and put it in a large throw away roasting pan.  It bakes up nicely and is enough to feed a large crowd.  Hope you enjoy!

Sauce
Brown 2 - 3 pounds of ground beef.  Cut up large onion, a large green pepper, and 2 cloves of garlic, and brown cook these along with the ground beef.  When meat is no longer pink, drain away the fat.  Place cooked meat and onions in a large dutch oven or stock pot.  To the meat add, 1 large can of tomato paste, 3 large cans tomato sauce, and 1 large can of tomatoes.  Add about 1 Tablespoon oregano, a scant Tablespoon of basil, about a Tablespoon of Italian Seasoning, 2 bay leaves, a splash of apple cider vinegar, salt to taste, and about a Tablespoon of sugar.  I also add crushed red peppers to my sauce because I like it to have a bit of a kick.  Cook this sauce for several hours so that the flavors can meld together.  I usually add extra oregano and salt to my sauce after letting it cook for a while.  I simmer mine for at least two hours and I stir it as needed.  This is also my basic spaghetti sauce, but I add Italian Sausage cut up with my ground beef for spaghetti.  (If you don't want to fool with the effort of the homemade sauce, Prego makes a nice sauce that is much quicker than this)!

After the sauce is cooked, cook a 1 pound box of Lasagna noodles according to package directions.  Drain.

Preheat oven to 350 degrees.  Butter your pans.  Spoon in a thin layer of sauce into the bottom of the pans.  Cover with a layer of noodles.  Sprinkle large handfuls of mozzarella cheese over the noodles. (I usually use almost all of two  large bags of Mozzarella cheese when I make lasagna).  Add ricotta cheese that was mixed with Parmesan cheese on top of the mozzarella.  Add some more sauce.  Continue layers ending with a layer of noodles.  I think a 9x13 pan holds three layers.  On the last layer of noodles, spread more sauce and sprinkle Parmesan cheese.  If I have leftover Mozzarella cheese, I sprinkle that on too.  Cover with foil and bake about an hour to an hour and a half our until bubbly.  I remove my foil the last 20 minutes of cooking.

The trick with lasagna is to make sure you have time to let it set for awhile after it has been cooked.  I like to let mine set at least 30 minutes before cutting into it.  This keeps it from running all over the plate when serving.  If you don't have time to let it set, it still tastes the same but it isn't as pretty!  Enjoy!

grace and peace,
julie
Posted by TnFullQuiver at 6:33 PM

Sounds yummy!!! right now I am making your monster cookies for my son's graduation party tomorrow, They are wonderful and quick & easy, and should satisfy any teenagers with a *monster* appetite, LOL!!! Enjoy the day!

WeeeHooo... you posted it! Thank you! I haven't been in the best of moods this morning so this was a nice surprise. (amazing how a recipe for food can do make us smile when we don't feel like it lol) I got online to respond to a couple people on my Blog when I just so happened to noticed your husbands happy face in front of that glorious lasagna! Thank you for posting it! Oh and I know just what you mean about not measuring. That's how I cook everything unless it's a new recipe. Thanks again... :D