Gifts from the Lord 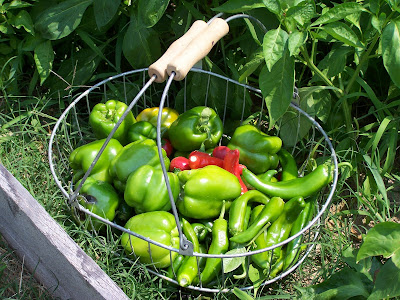 Yesterday we picked another bushel of tomatoes. Some of our peppers are starting to turn red. I think peppers are a beautiful garden bounty. Seth has learned that picking peppers can have a lasting effect. He picked peppers and then later rubbed his eyes which made them burn like fire. I don't know if he REALLY believed us when we told him that it was from the peppers. However just to be safe he has decided that picking tomatoes is a better option. 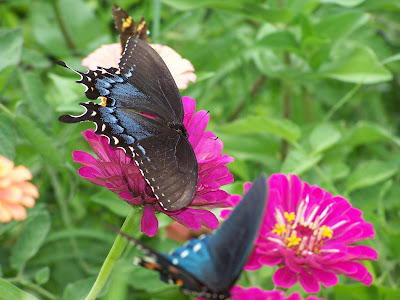 For several years, I have wanted to plant a butterfly bush. I love butterflies and I always thought it would be a nice thing to have in the landscaping. However since we keep changing our minds on what the landscaping should look like I have never taken the time to really plant one. Yesterday the butterflies lined up in the garden all over the zinnias. I have never seen so many butterflies all at once. I was mesmerized with the beauty all around me, and my heart was full of thanksgiving to the Lord. I still have butterflies even though I didn't plant a butterfly bush!!! Just another gift from the Lord, and I am delighted to receive His goodness.

Posted by TnFullQuiver at 7:59 AM

I really enjoyed your blog. I found it through the FamilyPrep blog. We have six children, three of whom are homeschooled, and live in PA. I am trying to learn so many new skills...Our garden was interesting. It's our second, and was small. But the Lord just planted some things for me, which must've been from last year's seeds!

What a great picture!! Maybe they were having a butterfly conference!!

By the way, my son is getting married in early October. I have a bit more than 2 weeks... THANK YOU LORD!!! =)

Mary,
I am so glad you commented. I love PA. It was such a beautiful state!! Each garden year is a learning experience for me even though we have been doing this garden thing for several years now. Nice to meet you and I hope you have a wonderful weekend!

Marci,
Oh...I missed that 1 month before the 2 weeks and 5 days on your counter. I am glad you have it all together and not dependent on me to keep you on track!!! Enjoy the weekend!!!

Those peppers are beautiful!

And I too love the butterflies. Oddly (and grossly) enough we have a lot of them in our yard. But they are not coming to any flowers; they are attracted to Allie's pee and poop. My son said we should bag the poop and sell it to people for attracting butterflies to their yards. He said we should call it butterfly bait.;)