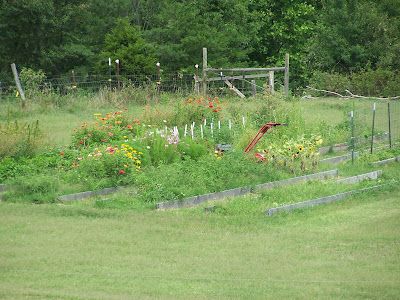 I have worked my tail feathers off over the past few years trying to grow watermelon. Surely it isn't that complicated, but somehow I have never managed to grow any watermelon worth eating. This year has been no exception. I planted a ton of plants and I think there are four watermelons on all of them combined! Somehow I don't think that 4 watermelons is worth taking up an entire bed. Our son was out the other day working on fences. He came in carrying a green round thing with little yellow dots. He found it in the horse and sheep pasture. He announced that there were 5 or 6 smaller ones over there. I knew immediately what it was. Last year I planted Moon and Stars watermelon in that pasture (before the animals were there). They never did do anything even though I carried water to them by the bucket loads during the drought! After the field was plowed this year, I guess they reseeded themselves and managed to grow without any care from me. I think it is me that is bad at growing watermelons!!! I am still amazed that our horses and sheep didn't eat them.

I have been trying to grow a second batch of squash and zucchini. We didn't get our fill earlier this summer because of the bugs. Right out in the field with the horses and sheep I noticed a beautiful squash or zucchini plant loaded with picture perfect yellow blooms. I was thrilled and shocked all at the same time. I am unsure how the seeds even ended up out there and again amazed that the animals didn't step on it or eat it. Go figure!!!

Each year my garden is truly a learning classroom for me. Sometimes I am successful and other times we go empty handed. Guess what I learned yesterday??!!! I learned that cows will eat pepper plants.... Who knew??? I also learned that cows like Cosmos flowers! I did win the fence battle with the cow at least for now. She has now been out of the garden for 24 hours and the sheep remain out as well. YEEHAW!!! Now I feel like a real farmer!!!

grace and peace,
julie
Posted by TnFullQuiver at 6:00 AM

I love when God surprises me with things in life like your watermelons and squash plant. It always makes me smile.:) His surprises always seem to come out of nowhere, amen?:)

We're getting towards the end of our garden this year. Squash were amazing. Corn was good. Tomatoes were ok. The jury is still out on the watermelons & cantaloupe. Beans & peas struck out. Go figure...

But we had so much to carry in that we actually used the cart behind the lawnmower to carry it all. (I don't know why I haven't thought of that before.)I told Tony that it made me feel like a "real" farmer so I can totally relate. ha!

It is amazing how things grow in the pasture when they won't in a well tended patch. We give the animals pumpkins every fall. We have heard from a reliable person that it really helps with worms. So, we go out for the cows and bust a few pumpkins on the ground and let them eat the seeds and the inside part. We have several little pumpkin patches that pop up here or there. Either undigested seeds or ones they missed. =)

Amy,
I would agree wholeheartly! The really neat thing for me is that I REALLY wanted a second chance with squash and watermelons. God knew my heart and he gave me the desires even though to some people those desires would be silly.

Nancy,
There is something about a large bounty from the garden that brings out the farmer in all of us. Our beans weren't great either. It was because of the sheep so at least I know it wasn't my fault. Are you planting a fall garden?

Marci,
I think that is so neat when we find these gifts throughout our pastures. I like to think they are just seeds that the animals missed in the first place, but reality says they probably were undigested seeds!! Pumpkins, squash, and watermelons are still no matter how the seeds came!