And Then She Grew 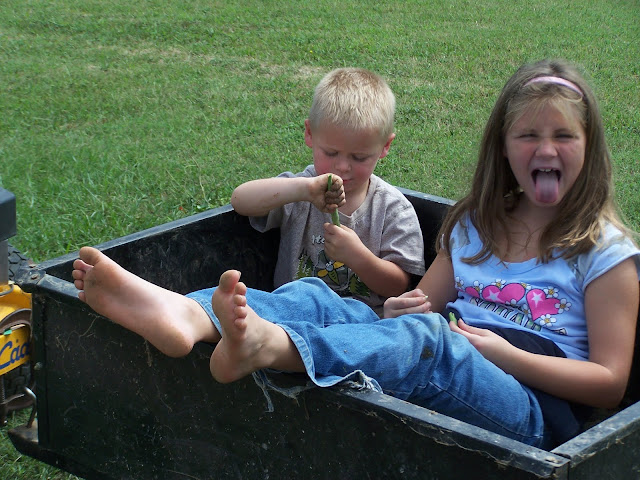 Yesterday was a typical Sunday afternoon.  I had planned on serving a large supper so everyone would be around to enjoy it.  Our oldest son had to work during the early afternoon time.  I wasn't in any hurry to start the Lentil Soup...it doesn't take long to cook.  I took advantage of the basketball game that was on t.v. and I sat down in the clean living room with a book and a cup of coffee while everybody else was yelling loudly downstairs for their favorite team.    I had just finished the last sip of my coffee when the phone rang.  A friend had been in a car wreck.  She had just dropped her daughter off at our house to visit with our second son, and she was driving back to her house when the wreck occurred.   We loaded up into the suburban to head to the hospital to check on the hurt momma.  It took several hours of sitting at the hospital waiting to hear that she was fine.  The last leg of our wait ended with bellies growling out for that supper meal that wasn't even started.  I called home and told my daughter that she was the designated cook for the evening.  I walked her through browning the sausage and told her where to find the recipe for the soup.  She called once to ask me what a bay leaf was, but other than that she had it all under control.  When I got back home, she had taken the cake out of the oven and put the glaze on it, made the soup, and was getting ready to start the homemade cheese bread.  I walked her through that recipe just giving her a few directions here and there.  I have no doubt that she could have made the cheese bread without any guidance from me whatsoever, but I needed to feel useful in my own kitchen.  I quickly threw the caesar salad together and made some homemade croutons.  We packaged half of the meal up and sent our son to deliver dinner for the hurt friend and her family.  Did I mention that it was very good?

I know that for busy moms sometimes it is hard to slow down the pace and let the little ones help in the kitchen.  Sometimes they make mistakes...sometimes they make messes...and sometimes they do both at the same time!  I am thankful that I have allowed Hope to cook with me over the years.  She feels at home in the kitchen.  She knows the procedures because she has grown up watching me and helping me cook.  I am thankful that my mom allowed me to play in her kitchen.  If you know my mom, I am sure this was close to her undoing!  She is a neat freak to the core.  I remember the time I had made a homemade cheesecake.  I had just poured the batter into the pan.  I was using her stove top as a work station.  When I lifted the pan up to put it in the oven, the whole bottom fell out of the pan.  Cheesecake batter went all into her stove.  It is a wonder she didn't have "the big one" right then and there!  I also remember the time I made a beautiful pecan pie while my parents where gone.  I had gotten into her treasured pecan stash and cracked enough pecans to fill the pie.  I had never cracked pecans before, and it was apparent with only  one bite of pie!  I had not gotten all of the shells off the pecans, and my dad nearly broke his teeth!  I am sure that was a costly mistake, but I still wasn't discouraged from trying again.

The art of cooking is passed from one generation to the next, and I encourage you to bring your little ones by your side.  By the way, don't just pass it on to your girls.  Involve your sons too in this wonderful world.  My kitchen is filled with messes, dirty dishes, good food, and lots of laughter along with kids by my side learning to cook.  They may not be helping me cook each and every meal, but they are a part of it by chatting and watching what is being accomplished.  My kitchen is truly the heart of our home because it is where my family gathers the most!

grace and peace,
julie
Posted by TnFullQuiver at 8:52 AM

Awww...that's so cute! I nearly laughed aloud with the bay leaf part--I could just see Hope asking that over the phone!

As much as you love your kitchen, you might come to enjoy the occasional break! Hope better watch out! ;)

I have 4 of the children on a rotation where they each cook breakfast and lunch for the family on their own and they help me with dinner. Love that time together!

Thanks for your words of encouragement. Glad momma was ok.

As always I want to eat at your house... LOL You inspire me to get my girls in the kitchen more.

Glad to hear your friend is ok and I'm sure someday your daughter will have her little ones in the kitchen at her side:)