The View Out My Window 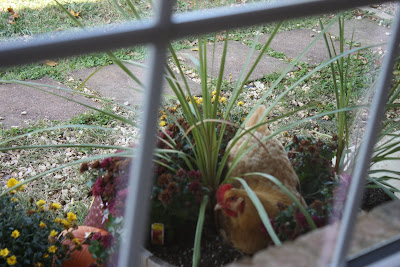 I glanced out the living room window this morning and realized that there was an addition to my flowers. Our buff hen decided to make a nest right in the bucket of flowers. I think she was trying to have revenge on me for yesterday. I went out to our large pile of hay yesterday morning. I quickly started forking hay to the cows. Just a side note...I wish cows wouldn't waste hay. It would work so much better for both them and me if they would just eat what they want and then go lay down somewhere else. No, they would rather eat what they want and then lay in their leftover breakfast. While they are there, of course they decide to pee or other things. Then they don't want to eat the hay. Instead they want you to give them fresh hay so they can waste half of that too! Because we try to be frugal with our hay, we always pitch hay to them as needed. Back to yesterday... I was quickly forking hay to the cows when all of the sudden I felt my pitchfork poke something other than hay. I heard all kinds of racket and realized that our adult hens had decided to bed down in the hay. At that point, I was unsure if I had speared the buff chicken or just grazed her. She came out of that hay running every which way. I was chasing her to see if she needed medical attention.. (Like I am really going to know what to do if she did)! Apparently, I didn't hurt her physically, but I must have made her mad. I think that is why she put her big fluffy hiney in my flowers this morning. Maybe she was just making sure she didn't end up on the end of the pitchfork again today!

grace and peace,
julie
Posted by TnFullQuiver at 1:53 PM

that is so sweet, oops,meant, that baddd baddd chicken!good pix

She looks so cute there;) Talk about wasting hay, I have 2 house rabbits and we go through SO much hay!! They're worth it though....I guess, LOL!!!!

Hi Julie, I had to catch up on your blog today, I've been sick, with h1n1 I think, but am better now. This post had me laughing out loud, too funny, I'd say she was definitely paying you back, lol
love those pics of Missy below also, it's the same here only on a smaller scale...for now :)

Chickens are so funny. I do think they have personalities.

Do you ever use a hay ring for your cows?

Oops! It was almost a "Chicken Noodle Soup" day. :)