A Cheerful Flower on a Blue Day 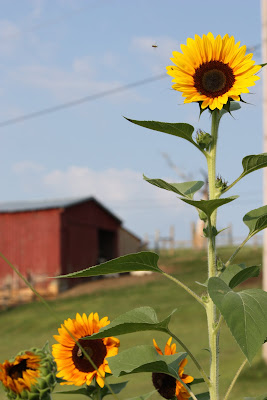 The last few days have been a bit hard for our family. Michael's job came to an end, and a possible move to a new job looks to be on the horizon. There are many bright spots in the new possibility, but that being said, it also brings sadness to leave what we thought to be our home. Our children aren't one bit happy. It seems as if we are putting out fires hourly between teenagers that are having moving issues and a 5 year old that swears that he isn't leaving THIS farm. Lucky for us, we can still pick him up and put him where we want him. Due to the fact that I was needing a voice of reason to help settle me, I called my middle brother. He is Mr. Reality and I knew I needed a good dose of reality. He told me right up front that I should be thankful that I wasn't married to an average bear instead I had a Nuclear Engineer bear for a husband which would make it easier for him to find a job. I knew he was right. He also told me that my kids would adjust and it would all be fine after the initial storm. I wonder if he would like to come weather the storm for me... If you think of us, please pray for our family. It would be much appreciated!

The bright spot of the day was that while I was doing dishes I glanced out and saw a bear on our property. I started yelling, and the whole family made fun of me. They were sure I saw a black dog or maybe our black calf, but most definitely not a bear. I made them all stand on the deck and watch. After just a few minutes the bear showed himself again, and to every body's amazement I was right. It was a bear. Of course I was too busy proving my point and then celebrating my victory with a victory dance right there on the deck to get any pictures. But take it from me...it was a bear. The bear was smaller than Missy, but it was a bear none the less!!

grace and peace,
julie
Posted by TnFullQuiver at 5:34 PM

Julie, I'm so sorry your family is going through such trying times, I will keep you in my thoughts and prayers and hope it all turns out! I have been a basket case lately as my son who turns 18 next month is determined he is joining the army and it has me terrified to say the least, and is not at all the future I had envisioned for him, but sometimes God has his own plans for us and we just have to believe it will all work out alright. I'm sure your hubby will find a wonderful new job, just hang in there:)

Oh Julie, it seems that God loves to stretch and grow us. I will pray His peace and leading for your lives.

I am thrilled you saw a bear. I finally saw a bear in the wild a couple of years ago, but it sure wasn't from home. :)

Dear sweet Julie my heart dropped when I read your blog because I know how much you all love your farm!! Be thankful for your brother that is grounded and can give you that dose of reality!! I know I would need it too! I will keep your entire family in my prayers. Isn't it great to know a Living God who is in control at all times. He doesn't sleep nor slumber and this didn't catch Him by surprise at all. There is peace in knowing Abba Father! Love ya!

Oh noes! I'm so sad to hear that you all might have to sell the farm and move! I love that place!

In the event that you do have to end up moving, you have mentioned to me how blessed you all have been with the value of the land increasing so much around you all.... If you have to move, look around Lexington! We'd love to have you all as neighbors and land is less expensive than in Tennessee. Our friends' families live in the area and there are lots of homesteading, farming, homeschooling families in the area. Lexington is a little better economy than eastern TN, too, though I have NO idea about Nuclear Engineering.

We'll be praying for you as you sort out your next steps.

Oh, Julie, I'm so sorry to hear about this, I know it will be hard to leave something you put so much of yourselves into but you are a beautiful family and there must be something even better in store for you all, I'm not sure either about Nuclear Engineering but I think it would be a good idea for you guys to move to southern ohio because of our nuclear power plant here (if that's what it means) and to be close to us, hehe...just a thought :P I will be praying for your family and if you should ever need a friend to talk to, I'm just an email away

it has now been one year that i too had to make this major move to a new state and city. my old life and its way gone. alot of dry times but truly today, i am thankful my Father saw the other side of the tapestry that He is working on in my life.i love my life but i do know there is more. dearest julie, mike and children, i am praying for Gods will to be done.