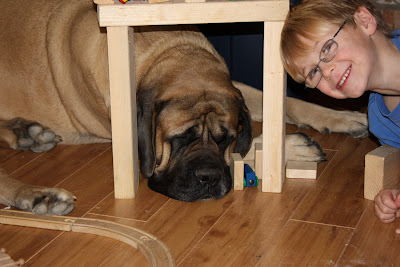 With all the remodeling going on lately, Seth and Missy have been left to entertain each other. Missy was hoping that Seth would forget about his blocks and leave them out for her to eat. She was much disappointed. 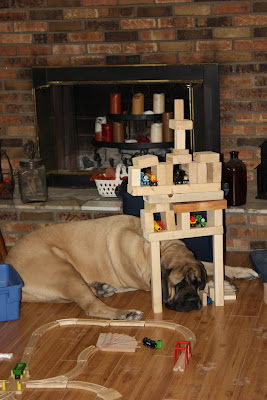 Seth incorporated her into his building project. Her head was under the tower. If she raised her head, she would have knocked the whole thing down. I guess he was confident that she would lay still for a long period of time. She does that most days! Now that the weather has turned cooler, she is starting to get into some trouble again. I have found her in the garbage several times these past few weeks. The highlight of her day is going with me to let out the baby chicks. She LOVES to chase them! She doesn't hurt them, but I am sure they are still terrified none the less. It still pays to keep an eye on her. You just never know what she might get into!!!
grace and peace,
julie

Posted by TnFullQuiver at 6:33 PM

OH MY GOSH, LOL!!!!! They are too cute together, and what an awesome tower:)

What a good girl and a cute boy!
Kitchen is looking great!
Wish I could "stop by" and see it. :)

Here is my opinion (even though you did not ask)...
Granite is great!! However, my opinion, is that tiles in the kitchen would be a headache. Food and stuff in the grout can look dirty over time. Also a great place for bacteria to grow. It may be more maintenance than you care to worry about. Just a thought.

I love the look on Missy's face.

Carmen,
These two bring me great joy...most of the time!

Ashley,
I am glad you added your two cents worth! I have the same reservations that you mentioned. We are still looking at all of our options. I don't want to have to do extra work if I don't have too! Thanks again for sharing your thoughts.


Marci,
Wouldn't you like to know what she is really thinking?