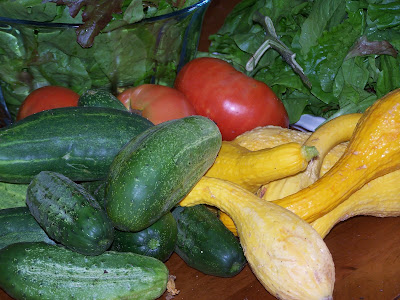 The Gist:
If the economy isn't grim enough for you, just check out the February issue of the Journal of HortScience, which contains a report on the sorry state of American fruits and veggies. Apparently produce in the U.S. not only tastes worse than it did in your grandparents' days, it also contains fewer nutrients - at least according to Donald R. Davis, a former research associate with the Biochemical Institute at the University of Texas, Austin. Davis claims the average vegetable found in today's supermarket is anywhere from 5% to 40% lower in minerals (including magnesium, iron, calcium and zinc) than those harvested just 50 years ago. (Read about Americans' Incredible, Edible Front Lawns.)

I saw this news clip on Yahoo news this morning. I quickly copied it to post about it later today. Of course the story ended with perhaps consumers should look to buy organic veggies in the supermarket now that these numbers are coming out in the light. 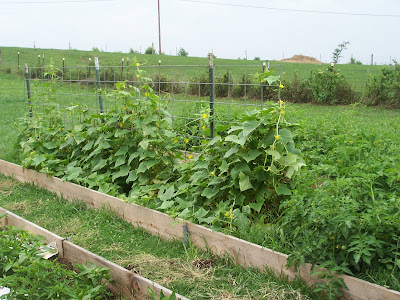 I would take that thought to the next level. I would encourage people to grow their own food if at all possible. That way you KNOW for sure what has been done with your food. 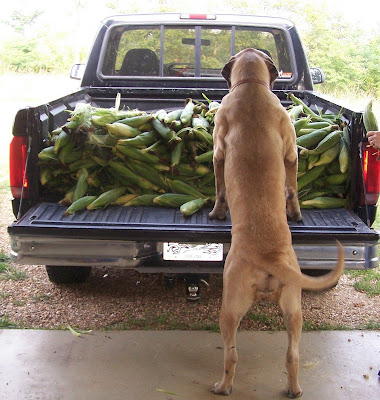 However, I do understand that not all people have the ability to grow their own food in today's world. My next advice would be to PURCHASE your food from a LOCAL organic farmer. The food will taste so much better than if you bought it in the grocery store, and you will know that it hasn't been shipped half way across the world with all sorts of chemicals and gases to keep it fresh. Check out your local CSA's. They can be a great alternative to grocery store produce.
We are not at the place as of yet to grow all of our own food. Several years ago we gave up growing corn and decided to purchase it from a local farmer who grows his corn organically. Our biggest reason was the drought conditions as well as fence issues. We knew that there was no possible way for us to water our corn. We just weren't set up for it. We paid the extra money and purchased the corn. It was organic so we knew it wasn't full of junk that we didn't want. We made arrangements to meet the farmer at 8:00 a.m. as he was coming out of the field. The corn was picked that very morning so we knew the flavor would be fantastic.
We also purchase much of our fruit that I use to make jams. We buy local whenever we can. I go to the local market and pick up the strawberries that were picked right here in our county. I buy peaches that have been grown in Georgia or South Carolina from a road side stand. I am sure these peaches aren't grown organically, but at least I know they didn't come from some other country. We also order our citrus fruit from a grove in Florida. I order at least $100 worth of oranges and grapefruit. They come to us the first weekend in December. We eat on these until February. I usually don't buy oranges or grapefruit again until the next December. These little steps help me to know that my food is full of the best flavor possible and that they come from as close to our home as possible.
grace and peace,
julie

Posted by TnFullQuiver at 10:57 AM

Paige said...
This comment has been removed by the author.
6:49 PM

This is exactly what Dan and I want to do! I like the idea of growing your own veggies for SO many reasons and although eating organic would be nice, it's WAY out of our price range right now. But growing your own would easily save you a lot of money as compared to buying it all organic.

How much gardening space do you all have right now and what % of your produce needs do you think it covers? I'm trying to get an idea of how much raised bed space I need to work up to to cover our veggie needs...

most of my life i have been a vegetarian (i strayed for 2 years) but not because of social causes but chemicals. always i've eaten venison, or homegrown beef, or pork but because of city life, i couldn't raise these things so therefor a vegetarian was the best way.) the jist of all this is that for 12 years never did i have meat WELL, a situation hit me that sent to the ER (my sister FOUND me in the br) and my organs had started shutting down well you know what happens next. finally an internist found out the problem after 2 days and said i had E-COLI. sis said impossible, i'd been a vegetarian at that time 12 yrs, (and this happened 10yrs ago) dr said oh yeah she could have it BECAUSE THE FRUITS AND VEG WE have HERE MOST COME FROM OVERSEAS AND THEY USE HUMAN WASTE AS FERTILIZER and that is how i got e-coli? and it never goes away, you only treat it. but because of my nutritional background i don't have bouts with it, thank the LORD but it will linger in the intestines. yep, organic or homegrown is the way and i can grow my own beef and veg now!!! Praise the LORD.
ps: being a veg so long, believe this or not, i could tell what store you bought your meat from because of the intensity of the hormones cooking in the meat when meat was cooked!

Love the new header. I have a question for you could you email me.

Paige,
I am going to designate several upcoming post to answer your questions. I have had a few people ask me the same questions so I thought it would be easier to post about it than answer individually.

Kay,
my mom had a similar experience eating plums. She was so very sick and because my dad had eaten everything she had eaten except for the plums they knew it had to be the plums. She didn't get ecoli, but she got something nasty. Thanks for sharing your experience!

Amy Ellen,
I will be happy to email you if I can find your address. If I don't you are welcome to email me. My address is:
miajul@comcast.net

Reading your blog only encourages us more and more that we have to be in a position to buy land soon!

Andrea Cherie,
It is all in the timing of the Lord. He knows your needs and desires! It will happen at just the right time.
grace and peace,
julie