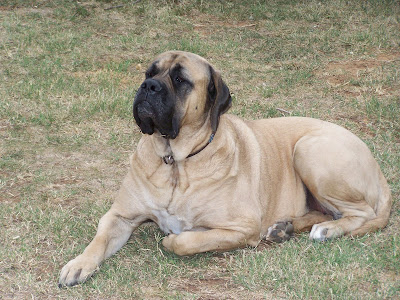 Missy has done well from her run in with the car. It has been 6 weeks since she was ran over by the car. She ended up with 3 broken bones in her foot. Two of those bones have healed, but we are still dealing with one bone that is being a bit stubborn. The vet says that it should only take a few more weeks and she should be fine. The funny thing is that every Friday night Missy decides to chew off her cast. It is as if she knows exactly when Friday night rolls around and it is time to free herself from the cast. How could she know that the vet has closed for the weekend? It gives her a few days of freedom from the cast. The vet encouraged me to make sure she doesn't put any weight on her foot when it doesn't have the cast. I smiled politely because that is what you are suppose to do, but inside I am thinking, "yea right...you try to keep her from putting any weight on her foot. She weighs 180 pounds!!!" Actually I am wondering if the foot injury will be a blessing in disguise. She isn't as likely to saddle up to the bar and stand on her back legs and partake of the food that is still left there. She hasn't even stolen one loaf of bread from the counter since she has been injured. In the life of owning an English Mastiff, the only truly safe place for food is the top of the refrigerator. That way you know for sure she can't swipe it and eat it before you can say, "looky there"! I have lost several loaves of warm bread cooling on the counter to her. She has trained us all very well. We no longer leave food anywhere that might be within her reach. However just the other morning Jacob let his guard down and left a Breakfast Burrito sitting on the table while he poured himself some orange juice. Missy lifted her head and gulped down the boy's breakfast including the paper towel that was with it. Jacob was forced to eat the dreaded oatmeal, but at least Missy had a nice breakfast. I am sure Jacob won't let that happen again!

grace and peace,
julie
Posted by TnFullQuiver at 10:38 AM

HAHAHAHA I just had to laugh about the breakfast part. Thankfully our dogs are all short, schnauzers, so they can't steal it but if something gets knocked off the table it is gone!
Hope she gets better soon.
Hugs
Amy

Yay! for Missy!
I pretty much laughed through the whole post. She has you guys very well trained. Just the way it's suppose to be - at least in the eyes of a dog.

Thanks for a good laugh- I can just see her scarfing that burrito right off the table in a matter of 2 seconds!

Haha, oh good ol' Missy! I thought of you guys the other day. One of our profs brought in his English Mastiff. Right at the end of his lecture, he asked if we had any questions, at which time his dog graced us all with a very noisy snore. It was priceless!