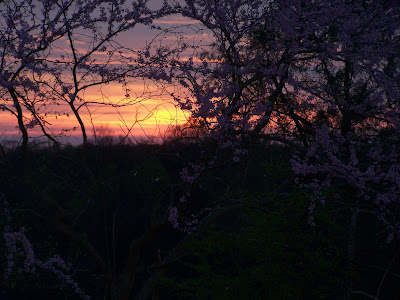 I had my jammies on, the nice satin ones that my mom gave me as a gift. I was turning my pretty quilt back when I happened to glance out my window. The moon was large and it was beautiful outside even though the wind was howling through the trees. I glanced at the hay bales that sit in the front yard to keep the animals out of them. That was when I saw it...there was something on top of the hay bale. I strained my eyes further so that I might could see exactly what that something was. I then realized that it was a sheep. It was after 10:00 p.m. and dark and windy outside. I had already chased the sheep TWO other times that day, and Michael was out bowling with guys!!! (How do the animals know when he isn't home??He only goes bowling with guys about twice a year)! I sounded the alarm, which by the way is a loud shriek from my mouth, while running through the house looking for my shoes. My oldest son had just gotten out of the shower and he was in his boxers and barefoot. The last time he got the animals back in they just followed him gently into the fence. I think that is what he expected from them this time so he casually walked outside with a flashlight in his boxers thinking all he had to do was call them and open the gate for them to stroll back into their home area. (I could have told him differently, but I didn't want to break his Shepherd's bubble at that point). Our second son took the time to get a coat, hat, and shoes. He was no novice and he knew the sheep were being contrary all day. Our third soon also took the time to dress, and I grabbed a jacket to keep out the biting wind from my satin jammies. As I was walking out the front door, my oldest son was running as fast as he could. Apparently Peter the Great was out too and he wasn't in a great mood. Matthew had walked over to the side of the field to round up the sheep and he was without any protection...including clothing. Peter saw him and chased Matthew. Matthew forgot about the new fence that Michael and the other boys had just installed this past weekend. He was running with all of his might and he dashed into the 7 wire high tinsel electric fence. The only good thing was that Michael hasn't installed the electric part! Matthew bounced off it like a pin ball and it pushed him even closer to Peter. Josh had headed outside and he saw the flashlight bounce up and down running the gamut of the fence. He heard Matthew scream and he knew that Peter was out there. He ran back to the porch and grabbed the broom. He jumped up on the hay bales and watched as Matthew ran past with Peter close behind him. Josh clunked Peter with the broom from the top of the hay bale, and it stunned Peter enough to give Matthew a chance to get into the house. Matt was good and mad by this time...he also decided that he needed clothes!

After an hour of rounding up the darlings, we finally got them back. We used every vehicle that we owned. We had just put them in the barn to be locked away until the REAL farmer could get home from his bowling outing, and then we saw three more sheep walking down the road. We spent a bit more time wrangling those into the barn. It was close to midnight as we all walked into our home. We all sat around laughing at our experiences and reliving the great sheep hunt. When the real farmer came home, he and I walked out to the barn to count the sheep. I was still in my satin pajamas. We had them all. I don't think they will be let out of the barn again until the real fence is in place and electrified!!!

grace and peace,
julie
Posted by TnFullQuiver at 7:58 AM

How funny! I laughed as I read this. The mental picture of it all!

Julie, I am with you. Animals have a knack for knowing when help is not around. :) The first week my son went to work, he worked every day but Thursday. On Monday, Wednesday and Friday all the cows got out. It was just me here. The people who had been living on the farm before us, still had 60 dairy goats out in our big barn. They were moving their dairy operation. On Tuesday, all 60 goats got out.

I am glad you got them all back in. How many sheep do you have?

Country Whispers,
All I can say is you should have been there! I am sure we were a sight!!!

Marci,
I think the men in our life put out a hormone that the animals smell. When they leave the farm the animals know it right away and they have already planned their escape route!! I can see you chasing 60 goats!!!

We now have 27 sheep. There are 4 more left to lamb. These were our youngest sheep so they were bred later than our older ewes.

you know its just like "the kids know when dad isn't home"?

Haha, that's so funny! Dan and I got quite the laugh out of it!