Something Out of Nothing 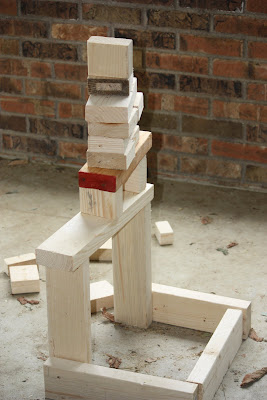 They were just leftovers from the 15 year old's temporary wall project. I am sure his Daddy told him to put them somewhere other than the carport. He was faithful to put away the saw, but the scraps somehow got left behind to be attended to another day. Then the 5 year old found them. He was thrilled to find such a treasure just sitting all over the carport. He is good at making something out of nothing. I can't tell you how much fun has been had with a stray stick or an old rope. He just knew that his brother left these treasures on purpose to bless him. "Look what Josh made for me!" has been his cry ever since he found them. I was trying to figure out how to store such a lovely gift. The new blocks aren't allowed in the house due to the fact that the English Mastiff has eaten every block ever brought into our home. As I mentioned to my husband something about a pretty container to contain them until the next building project, I noticed a grin upon his face. He had a far away look as he spoke. "When I was a little boy, my grandfather made me special wood blocks. I loved those gifts from his wood shop." I now wonder if his grandfather really made them for him or if a chubby handed grandson just thought he did. I guess it doesn't really matter which was the case because both my husband and son have made great memories out of nothing but scraps, which each of them believed were made just for them.
grace and peace,
julie
Posted by TnFullQuiver at 10:12 AM

Ooh, I LOVE making something out of nothing, LOL! Enjoy your day:)

I love your family stories, Julie. You always manage to touch my heart every time! So many times we are too busy to notice the little things our children get excited over. You are very wise to stop and take notice. After all, our little ones seem to grow up sooooo fast and all we have are the memories. Children are such a blessing!

This is great! So clever & frugal! Our children through the years have amazed us by their simple ways to have fun!

Isn't that sweet!!! I just love seeing the world through their eyes!! sharon

Thank you all!!! Children are truly a delight to watch.
grace and peace,
julie

isn't that just like a little child? to think just for him? our Father does that for us all the time. Please Lord help me to see all the "little" things you do for me!
xoxox kay