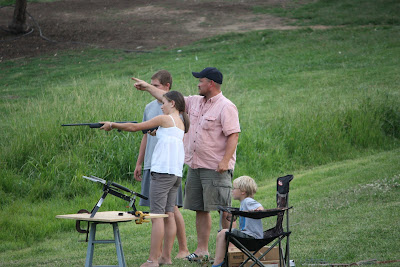 People often ask me what do we do for fun living so far from town. I have to remind them that it only takes 25 minutes to get to town so it isn't like we can't go if when we want to. Truth be told, I would rather stay at home and play here. Sunday evening we decided to set up a gun range in our backyard. Michael brought out the clay pigeon thrower and we each had a turn. Michael taught a friend how to aim and shoot. (We asked permission from her parents first). She was a little intimidated, but she was willing to try none the less. 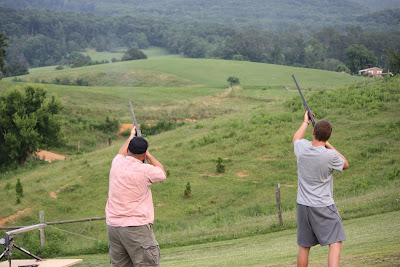 Here father and son are taking aim at the clay pigeons. We spend time with our children and guns so that they are not something mysterious to our kids. Michael teaches the kids about gun safety each and every time he gets them out to shoot. Our kids feel comfortable around the guns, but they also have a high respect for them. 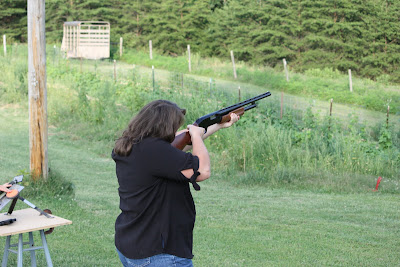 I too enjoy shooting. I haven't done it as much as I would like these last few years. Perhaps I can change that in the next year. My dad taught me gun safety and how to shoot when I was around 12. I was thankful for this education because I knew if I needed it I would at least be familiar with a gun.
When Michael and I had been married just a few years, he was stationed in upstate New York. He worked nights and I was home alone often. One night around 8:00p.m. I was on the phone long distance with my dad. During our conversation, our cocker spaniel kept barking and barking. I usually would have just let him out the door, but we had a skunk in the neighborhood earlier that week so I kept telling the dog to be quiet. After about an hour, I hung up the phone and picked the dog up to sit down to watch t.v. We were sitting on the couch and out of the corner of my eye I saw a man. My dog knew this man had been there the whole time. He was waiting for me to open the door and let the dog out of the house. He had been there waiting for at least an hour. My heart sank and I immediately walked upstairs. I didn't want the man to know that I had seen him so I tried to act casual. As soon as I hit the bedroom door, I quickly found Michael's shot gun. I prayed that I was loading it correctly because I had never shot this particular gun. I knew I had to go downstairs to call 911 because we didn't have a phone upstairs. As I was walking down the stairs I was prepared to defend myself if need be. I saw the man, but more importantly he saw that I had the gun. I crawled under my kitchen table grasping the gun praying that this man would just leave, and I spent almost 30 minutes on the phone with the 911 operator. Do you know what that man could have done in 30 minutes time? When the police officer arrived, the man was gone. I don't know what would have happened that night had I not had my husband's gun there. I will never know, but I do know one thing. I will always have a way to protect myself if need be. I also want to give that same gift to each and every one of our kids.
grace and peace,
julie

Posted by TnFullQuiver at 7:32 AM

I had a very similar experience as well the first year we were married! It was very scary indeed! Thankful to have had a gun in the house. I really didn't know how to use it at the time, but after that incident, my husband taught me at my insistence!
Every woman should be taught basic gun safety. It could be a matter of life & death for her or the family.
Thanks for sharing!

Your story shows how God watches over us and protects us. Just having the skunk around was part of it. That is what made you not open the door. Praise the Lord.

Oh Julie...I can't even imagine how frightened you must have been! My husband works the night shift so my german shepherd sleeps with me! She does bark sometimes in the night, but so far its just been deer or racoons she hears.These days you just never know! My son learned gun safety around age 12 too, grandpa got him started with that and hunting and he still loves it,I like it too as it kept him from wanting to hang out in town like so many of them do now! Hope you have a lovely and SAFE day:)

What a great evening of family fun. Memories that will last a lifetime!

Our boys have been taking gun safety as they are old enough, and enjoy practicing, too. In August we are hosting an Appleseed Project weekend, and it's amazing how much riflemanship can be learned in that short of a time.

just wanted to tell you how much I love your blog, I ran across it looking for families who own a matiff to see how they really are day to day (I have read all the info sites about them)we are getting one next month and I can't wait!! but then I had to start from the beginning and read it all, love your recipes and stories, similar thing about your son and his eyes, my oldest son started saying he thought he may need glasses in 4th grade, well his friend had glasses so I "knew" that's why, even though when asked to pick up something in front of him he said he couldn't see it, I would say teasingly, are you blind it's right there, oh yea, I was building myself up for the worse kind of guilt, took him for the test and he confirmed my thoughts when he could only read the big E on the eye chart, I turned to the dr and said see, told you he was making this up, that's when the dr. told me how bad his eyes were, and when he came home with his glasses and he was amazed to see leaves on trees and little things I took for granted seeing, he's 21 now and I still feel bad for not noticing, lol, but we are only human, again I love your blog, thanks for sharing it, sharon adams

jwcreath,
I believe strongly that every woman, man, and child should be taught gun safety. It only takes one time of needing a gun to make your heart shift to wanting to know how to use one!

Marci,
You don't know how many times I have thanked the Lord for sending that skunk. Who knew I would be so thanfkul for a smelly skunk!!


Carmen and Ashley,
Hunting is something that my boys treasure too. Good memories for them!

Lynn,
Sounds like you have some fun ahead for the weekend. Enjoy it!

sharon,
Thanks for sharing. I am glad you are enjoying the blog. Let me know how the English Mastiff works out for y'all. I think you will fall in love! I am glad things worked out for your son with his eyes. It does make you feel bad when you realize that you didn't catch it earlier, but alas you are right. We are only human and we make mistakes too!