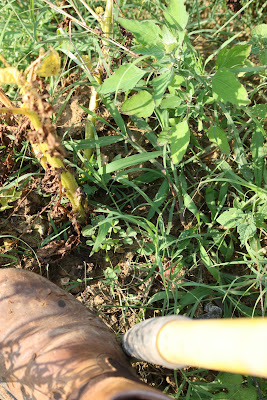 Our potatoes were full of weeds. I think it happened during our vacation to the beach. I didn't find the time to hoe them as well as I should have. I have learned that weeds are ugly, but the plants will usually still produce even if there are weeds in the garden. Due to the amount of weeds, I chose to put on my husband's work boots just in case a slithery snake might decide to show up for the party. I took our pitch fork and began to dig the first row of potatoes. The Red Norlands were beautiful. I intended to dig all three rows of potatoes up in one day, but as the morning went on I decided to let the others grow a bit longer. 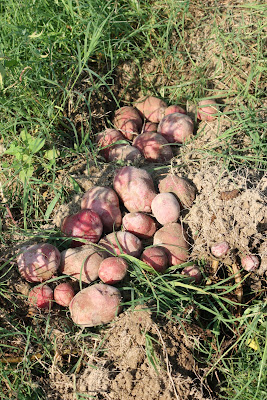 At the end of my morning, I had beautiful piles of Red Norlands and Yukon Golds just waiting to be put in bags. I still have two more rows to dig, but this time I think I will include my kids. I intended to have them come out and help me, but it was such a cool morning and I was enjoying some quiet time with the Lord. I never called the kids. Instead, I just kept praying and digging. It was a nice time in the garden with Him.
I let my potatoes sit outside to dry out for a little while. I would have left them all afternoon, but I knew the English Mastiff would assume that I planted cool balls for her and eat each and every one of them. I would not have been happy so I chose to pick the potatoes up quicker than normal. The next problem I encountered was storage. We don't have a root cellar, and the basement is cold but it also has lots of light. I decided to store some of my red potatoes in an old basement refrigerator. I have stored another bushel of potatoes in our coat closet. It is cool and for the most part dark. Problem solved.
Today we are tackling killing some of our meat chickens. Please be aware that I use the term "we" very loosely. My husband and son and daughter are at a baseball tournament. I am heating water (that is my part), and our 15 year old is doing the meat chickens. I promised him that I would server potato soup tonight for dinner. I did think a big pot of chicken and dumplings might be good, but then I decided against that! I best hurry and get my water on to heat... I know it is a tough job, but somebody has to do it!
grace and peace,
julie
Posted by TnFullQuiver at 10:05 AM

Julie, those rows of potatoes fascinate me! What a treasure to unearth. Sounds as if you'll be well stocked up.

You are one brave soul, with the poultry butchering. As much as I'd love fresh chicken, I don't think I'd be able to butcher. Thank God for your trustee son & his help!

TxDoodler,
I too am fascinated with the potatoes. This is our first year of growing them so it is exciting.

I could write a whole other post about "our" butchering day. It wasn't pretty!!! I may never eat chicken again!