This is Lambert. We noticed this past weekend that this little guy wasn't doing well. He is very thin and he was having a hard time doing much of anything. We quickly took him from the flock and started working with him. First, we gave him a dose of worm medicine. We do not worm our animals on a continual schedule. We wait until we see evidence of worms and then medicate them. This way healthy animals are not being treated unnecessarily. We have had a few sheep show signs of worms so we medicated them all. We also gave him a shot of antibiotics. We didn't know for sure if that would help, but it was better than losing him. I think his problem was lack of nutrition. His mother's milk sac looked completely dried up and I think he wasn't getting water. 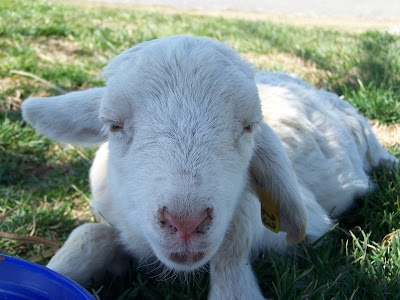 He was so weak that we had to hand feed him corn. He would eat it if we put it in his mouth, but he wouldn't eat it from the ground. We tried giving him a bottle, but he wouldn't have anything to do with that. We brought him a bowl of water and hand fed him corn several times a day. 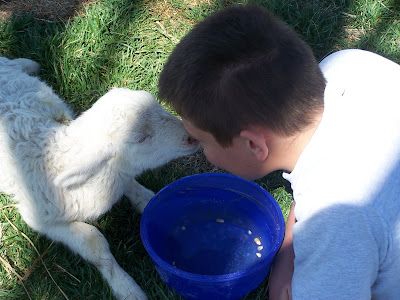 He is always happy to see us coming to get him. Jacob and him are big buddies now. After two days of extra attention, he is strong enough to be out eating grass with the other sheep. We are still bringing him to the front yard to make sure he gets his portion of corn, but we no longer have to feed it to him kernel by kernel. I think he is going to make it, and now I am more quick to look at all the lambs. Just because they are two months old doesn't mean that we can forget about them. Raising lambs in the winter is much different than raising them in the summer. We are new to this whole animal raising thing so I feel like our poor lambs are our learning curve. We are learning something new with each new birth, but sometimes it is at the expense of the life of the lamb. We won't make the same mistakes twice, but I would rather not make them at all. 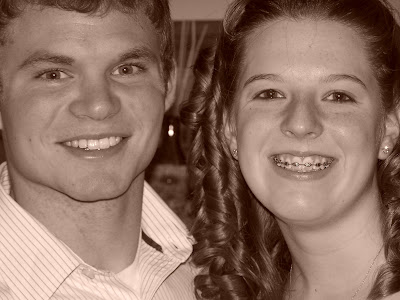 This girl has been spending a lot of time here on our farm. She is smitten with our oldest son. She really enjoys the animals. She spent about 5 minutes with the new chicks and had already named several of them. She was then able to identify the ones she named. I suggested that she stick to naming the colored birds. She was unsure why I would instruct her to do that, but when I told her that most of the yellow birds would be eaten she quickly understood. She is the one who broke the farm rule this past weekend. She took one look at the weak lamb that we were nursing back to health and declared that HIS name shall be Lambert. I am afraid that she has become quite attached to the little guy. I don't have the heart to tell her not to befriend the boy lambs. Perhaps we can divert her attention to a nice girl lamb instead. She does love Angel. She fed her bottles every time she was at our home. This is the same girl that got a hen thrown at her the first time she came to our home. You can read more about that here


grace and peace,
julie
Posted by TnFullQuiver at 1:25 PM

Paige,
No..it was a snowball dance at her school.
love,
julie

Good job on getting "Lambert" back to health. Even though you say that you're on the learning curve with the farm animals-I wouldn't have guessed. I think y'all are doing a fantastic job! You show real wisdom in all the choices of their care etc. You're an inspiration & I almost considered ordering chicks thru the mail (just kidding about the chick part). I used my better judgement & ordered seeds from your favorite "Heirloom Acres"-I can't wait till they get here! My fingers are itchy to get planting.

Haha, I figured it a was dance of some sort. I'd be worried if she spent that much time on her hair all the time! ;)

TxDoodler,
Who knows, maybe by next year you will be ordering chicks too. I am glad you order seeds though. let me know what you think!!!

Paige,
You would like this girl. She doesn't have that made up look at all. She is very down to earth.
grace and peace,
julie