I Want a Weekend Redo 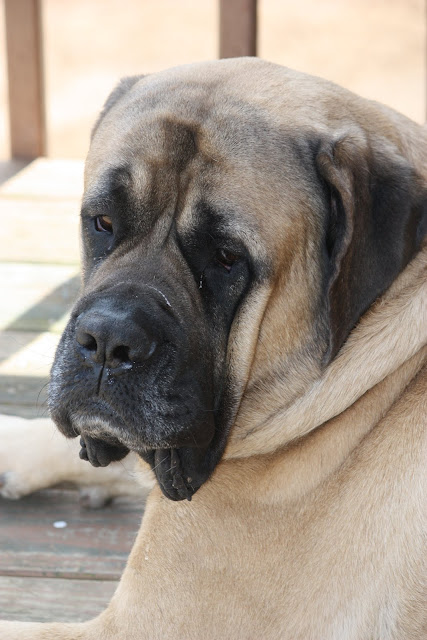 The highlight of my weekend was that I am now fast walking over three miles up and down hills once again. If you know me very well, you know that means my weekend wasn't the best that I have ever seen. Let me tell you about last night...

I was tired and had put on my ugly jammies.   These are the jammies that are so comfortable that I don't care what they look like.  I had gone back into the kitchen to visit with my oldest son while we were waiting on the second son to arrive home.  My husband and two other kids had been gone to baseball games all day.  They weren't expected in until close to midnight due to all the rain delays that made the ball games get so off schedule.  I had the big wooden front door open so I could see when our second son pulled into the driveway.  All of the sudden the gentle English Mastiff started barking in such a way that I had never heard before.  She was mad, and I just knew that some dumb shmuck was trying to break into the house.  I ran into the living room to find that the English Mastiff had seen her reflection in the glass storm door.  She was about to tear down the door to get to the evil dog on the other side.  I quickly opened the glass door so she could go bark her head off at the imaginary intruder.  My oldest son and I were laughing at this time, and then all of the sudden he looked at me with his face all wrinkled up and asked, "What is that awful smell?"  I too smelled the foul odor and I remembered that I had smelled that smell once in my childhood.  I looked down on the floor and I saw little droplets of liquid, and it all came rushing back to me.  Dogs are designed with anal glands that drain off foul smelling liquid.  I grew up with poodles and my mom used to deal with all of that nasty stuff.  I suddenly realized that I was the mom and I had better do something about the mess quickly.  When Missy barked so hard at her reflection, I guess her anal glands drained in the middle of my living room.  I quickly cleaned up the mess, but the smell had already permeated our upstairs.  Think about a skunk and add enough body weight to make it 200 pounds.  That was the kind of foul smell that I am talking about!

My oldest son decided that he couldn't stay in the house so he promptly ran to the deck for some fresh air.  In a matter of minutes, he threw open the door and asked me if I had called the police!  "No, I didn't think they would want to smell that smell so I most certainly didn't call the police.  By the way, why do you ask?"

Two police cars were coming down our road with blue lights on, but they were driving slow.  We live out in the middle of the country and we don't see police lights often.  I don't think we have ever seen them out here.  Then I realized that our second son was actually being escorted home by the police cars.  I knew this probably wasn't good.  I had to walk out front in my ugly jammies to address the policemen.  I knew I had no credibilty in such ugly jammies, but there wasn't any time to go change.  When our son pulled in, the policemen continued to drive down the road.  I was never so thankful to see cars drive away in all of my life.

On the drive home, my son's headlights went out.  He couldn't get them to come back on so in all of his 16 year old wisdom he decided to drive home with his parking lights in the dark.  He said that the policeman pulled him over.  Apparently we didn't go over with this child how to handle being pulled over by a policeman so Josh gets out of his car to shake hands with them.  Let me just say I am so thankful that they weren't state troopers.  Josh probably would have been shot!  They were very kind to him and told him that they would escort him home.

I was so relieved that Josh hadn't done something to cause him to be in trouble.  As I was turning around to go back into the house, I saw one police car coming back.  He had turned around in our neighbor's driveway and was heading back out by way of our house.  Missy was still outside and she must have been feeling much better so she runs full steam ahead to chase the police car.  I am horrified because I can't do anything with her 200 pound self when she is really wanting to do something.  Plus I wasn't about to run after our rebellious dog chasing a policeman in my jammies!  To make matters worse, this policeman had a K9 unit.  He had a loud barking shepherd in the back of the car.  Missy was going to take down that dog.  I guess she just knew it was the same dog that she saw earlier in the storm door!  The guy was trying so hard not to hit Missy with his car.  He stopped and then he would drive a few inches and stopped again.  I just knew we were going to be ticketed for having an unruly dog!  I was yelling at my oldest son to do something with his dog.  I never saw how that one ended because after he went out to rescue the policeman from Missy, I promptly went back into the house and went to bed.

The last thing I heard before falling asleep was our second son closing and locking the front door and yelling, "What is that awful smell?"

Still laughing! Sounds like our house! Never a dull moment! Our 6 children & 3 dogs whip up all kinds of excitement around here! Sleep well tonight!

LOL..oh my gosh Julie, you had a BUSY night! That is too funny, and working at a vet clinic for almost 7 yrs. I know *that* smell very well:( That officer probably made a mental note to never come down your road again:) You should take all your wonderful posts and write a book someday!!!