Enjoying the Bounty of the Farm 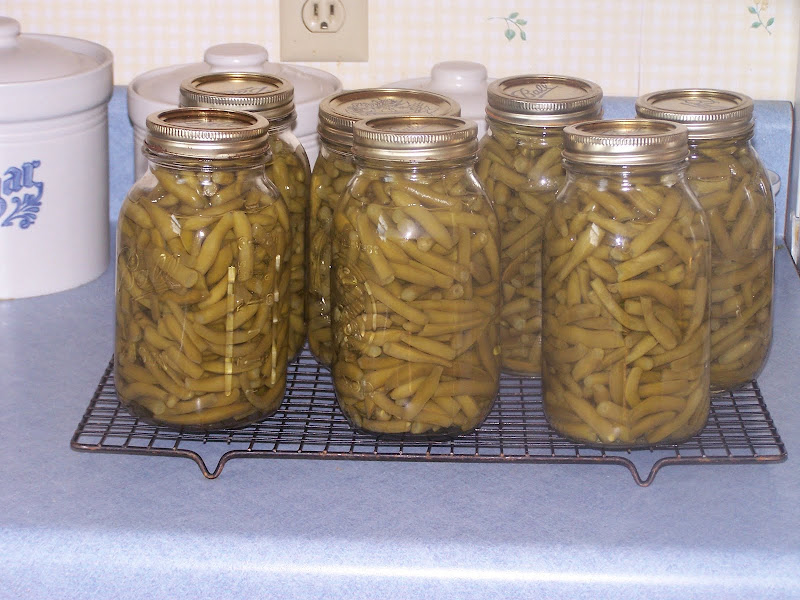 When I first heard that Michael would be losing his job my first thought was "Did I put enough food away to sustain us?" I knew in my heart of hearts that I didn't. If it had been the previous year, we could have made it much better. I stored so much food up the previous year that I didn't feel the need to do as much last summer. However, I have been pleasantly surprised at just how much had been tucked away into beautiful jars. Our grocery budget has been cut drastically, but we have eaten fine just the same. I have adjusted our menus around what we have in the freezer and on the pantry shelves. For the most part, we are eating good old fashion country fare. If this food had not been squirreled away, our savings would have been depleted much quicker. I am so thankful for the lifestyle that we have chosen to live. It is great in good times, but it is even better when rough patches come our way. Over the last few years, I have also learned to shop sales and stash the extras away for later use. It has been nice to see so many extras tucked here and there. Michael is working again although we will still have to watch our budget very carefully. I am so thankful for the knowledge of knowing how to save money in the kitchen. I also know when to splurge on a special meal when need be. Tonight is a good example. We are celebrating our son's 13th birthday. He wanted fajitas and an Oreo Ice Cream Cake. I knew that was his desire in time to watch the sales at our local store. I got the shrimp for half price! When money gets tight, one of the first things that I quit buying is deli meat. Instead I will buy a whole turkey or chicken or ham when they are on sale. I am able to make our own sandwich meat much cheaper that way. I am also left with the extra meat to use in other dishes as well. I love having a ham bone available to make a pot of beans or soup! Yes, it does take some time and planning, but it is a great way to save money when you are feeding a large family. If I had known this summer that Michael would be without a job, I would have made a fall garden a huge priority. It would have allowed us to vary our meals more. I have learned a few farm lessons over the past few months. One of those is not to get lazy because you just don't know what tomorrow is going to bring. Truth be told, I was tired of the garden and I just didn't want to mess with a fall garden after all. I figured it wouldn't be that big of a deal any way. I wish I had mustered up the desire to get out there and make it work. I bet I won't let that happen again next year!

julie
Posted by TnFullQuiver at 9:00 AM

That's wonderful! I can't wait to have a garden and a pantry stocked full of all my own home-grown goodness! Where is Michael working? That's wondeful news! Are you all able to stay in Tennessee for a while yet?

Those are wonderful tips and ideas for others going through rough times as well. I hope you can end up staying on your farm. I read in one of your old posts that you used to make soap, I make soap and candles and sell a little online and consignment at a local shop, have you ever thought about something like that to add to your income? I know the things I sell don't help alot, but it does help and people love homemade things!

I love your "squirrel-like" characteristics. I would share a tree with you any day! lol
blessings,
ashley

Well Happy Birthday to your 13 year old!! I have learned the same trick with the store specials and stocking up. Our Publix has buy one-get one free deals every week and it really helps out with a large family...especially boys! So good to hear Michael has found work! Your family is in my prayers.
Pam

Paige,
Someday you too will have your own garden and pantry. You are so far ahead of where Michael and I started. You already have the experience and knowledge. Now all you need is the ground. Yes, we are hoping to stay right here on this farm. I am looking to go back to teaching to make the ends meet. We will just have to wait and see.

We did use to make soap. It was something that we enjoyed, but not something to make money on the scale that I can handle. I haven't even thought about making soap lately. That sounds like a nice winter project. I think I still have enough materials to make several batches. Thanks for the idea!

Pam,
I miss Publix. We don't have them up here. I LOVED the bakery there. I agree with the buy one get one free deals. And yes, it does help with teenagers!!! Thanks for your prayers. They are much coveted at this time.