What I Learned at College In Just One Day 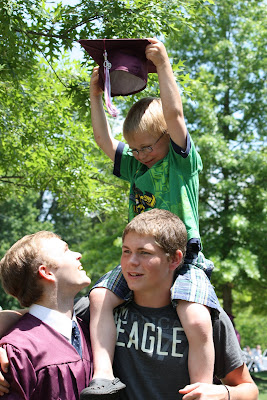 After spending the entire day at the college freshman orientation, I decided to share with all of you what I learned. This is some earth shattering information so be prepared before beginning to read.

First, if you have birthed 5 children NEVER drink 2 cups of coffee and then sit through a seminar. I don't know what I was thinking, but the bathrooms were far far away from the seminar room.

Second, bring breath mints to share with the other moms who keep whispering in your ear. Somehow every mother that chatted with me was a smoker!

Third, spending $50 for a freshman orientation was a waste of money, except for the fact that we had to do it if he wanted to register for classes. Go figure...you would think that paying $7,000 for tuition should be enough to cover the fee to register for the classes!

Fourth, did you know that only one out of every 2 college freshman will graduate? According to the big wig man doing the speaking, this poor stat is due to the fact that the students let life get in the way. I thought that was called LIVING...apparently I was wrong.

I was also reminded just how much I like being at home making a place for my family to live life to its fullest.

You made me laugh!! Thankfully my mom *enjoys* filling out forms, so all those fafsa and other forms she gladly filled out for me when it came time for college!

Glad you're back on the home front, it makes my heart happy to hear women say that's where they belong. A lot of my peers think we are odd for me to simply be a homemaker. :)

I am right there with Andrea - you made me laugh too (you have a way of doing that) - Thanks!!

Haha, I can just see you now! Btw, I have some good friends in PT school atm, if Matthew wants to talk to them about it. Most places are going to a doctorate degree to finish!

Oh, and I would have LOVED to spend $7k a year for college...that's what I get for a private school....