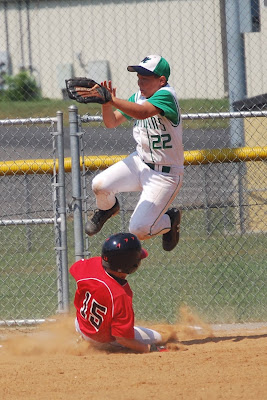 Jacob's 12 and under baseball team had a wonderful baseball weekend. They played their hearts out, and were rewarded for their hard work. They became the 2009 Tn-USSSA Baseball 12 and under Double A champions!!!!!

They played hard last weekend just to qualify for the tournament. Only 16 teams from around the state made the qualifications. This weekend was spent playing for the gold. After 4 straight games, we finally came out on the winning end!!! Let me just say, it was one hot weekend. I was amazed that those boys could play 4 straight games in the heat. They started playing ball at 12:45 in the afternoon and they ended around 10:00 p.m. They only had enough breaks in between games to get a drink and eat a bit of fruit or granola bar. When the last play was made, you wouldn't have even known the boys were tired. They were whooping and hollering like there was no tomorrow!

We only have one more tournament left this season. They will be playing in the Double A world series located in Knoxville. Then we will have a break from baseball until fall!!!!! Did I mention that my little man had a great weekend?

grace and peace,
julie
Posted by TnFullQuiver at 7:20 AM

Wow! Congrats guys! That's quite the accomplishment and I hope you got a nice trophy to go with it!

Congratulations to Jacob and the team!! What a great picture moment you captured!! Is that Jacob catching the ball? Nice shot!