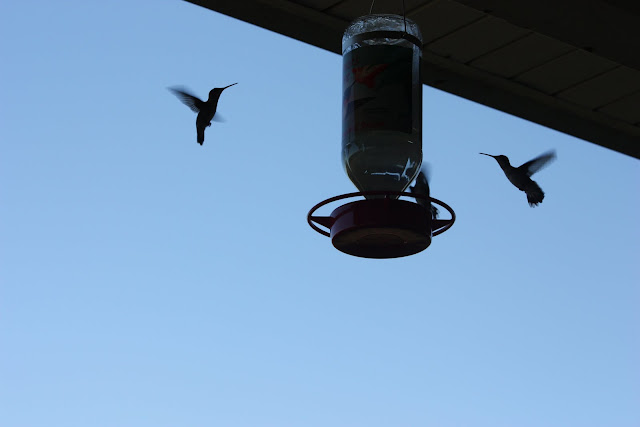 The weather has turned off cooler the last week or so.  We have taken advantage of it and spent a lot of time on our front porch.  We have been enjoying the humming birds. 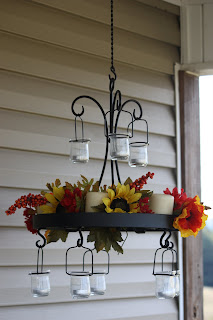 With the cooler weather, the thought of fall is on my mind.  I have had this candelabra piece for almost two years.  It was still in the box because I had no where for it in our other house.  I assembled it last night and added some cheap silk flowers.  I love the fall touch that it adds to the front porch. 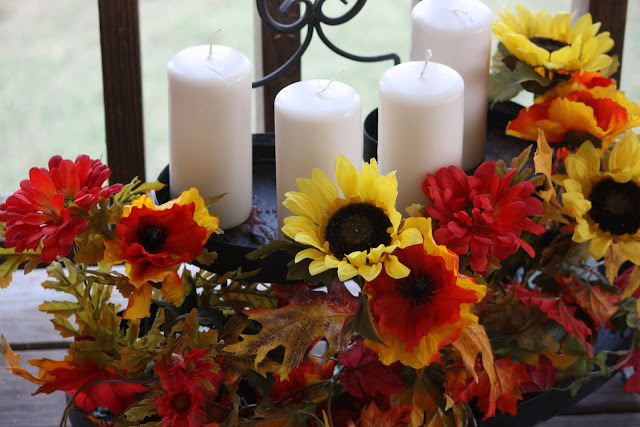 I also had another piece that I kept in our fireplace in our other house.  It held pillar candles, and it was always pretty glowing with candle light.  I had some leftover flowers and only a few pillar candles.  I threw it together and placed it on the other end of the front porch. 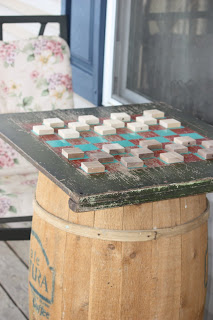 I also created a checker area on the front porch.  Michael's dad gave us this checkerboard before he died.  He grew up playing checkers on it.  I wanted Michael to make some checker pieces, but he has never taken on that task.  However, he was in the process of building a chess board.  He had all the pieces cut out.  I was stuck in the shop helping him get it in order. I found the pieces and decided that they could be used as checker pieces.  He wasn't thrilled, but I promised him that they would be alright.  We put the board on top of an old barrel.  The kids are always gathered around playing checkers.

I am ready to get some rocking chairs for my front porch.  I am also ready to find the rest of my fall decorations.  I love this time of year!

grace and peace,
julie
Posted by TnFullQuiver at 5:56 PM

Everytime we go to Cracker Barrel my kids want to play checkers on their boards on the porch. Fall is my favorite time of the year, the smell in the air the colors and oh yeah hunting season.

hi good day ! nice post you have . about this hanging ornaments .they are beautiful and necessary to us . sometimes we need this ornament to add attraction in our house or garden. it depends only on how you put it or the arrangement in order to fit it in your interiors . like me i have some hanging ornaments which i contrast with my garden accessories and wind spinners and they blend perfectly .

Beautiful! I want to come visit awhile on your front porch. :O)