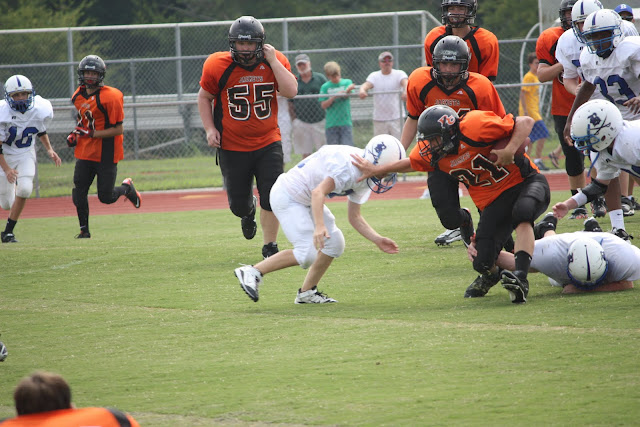 This past weekend was full of fun activities, company, and a birthday celebration.  First, on Friday we had some dear friends drive an extra 4 hours out of the way to spend the day with us.  I can't believe I didn't get a picture, but I was busy visiting.  Later that day our oldest son's girlfriend also came to spend the weekend with us.  I was a little worried about her driving down by herself, but she made it just fine. Our son had to stay behind and work.  Such is the life of a college student who has to pay for an apartment!

After a fun filled Friday, we spent Saturday at the football field.  As  you can see by the picture, this football season will bring our boys playing for a new football team.  Jacob looks odd wearing the #21.  He has always had the #22 on all of his jerseys.  That number was already taken.  He is enjoying running the football for his new team, and he doesn't care what number is on his jersey as long as he can run the ball!  After spending the day at Jacob's jamboree, we then loaded up the family and headed to Chattanooga to watch Josh play for his new football team.  Unfortunately, I don't have any pictures of him.  My camera got left on all day and the battery was dead.  I felt so bad about missing taking pictures of his first outing with his new team.   However, I did get to enjoy his performance.  He looked like a total different football player than in times past.  I was impressed.  It was during this moment that I missed our oldest son the most.  He would have just beamed if he could have watched his brothers play football. 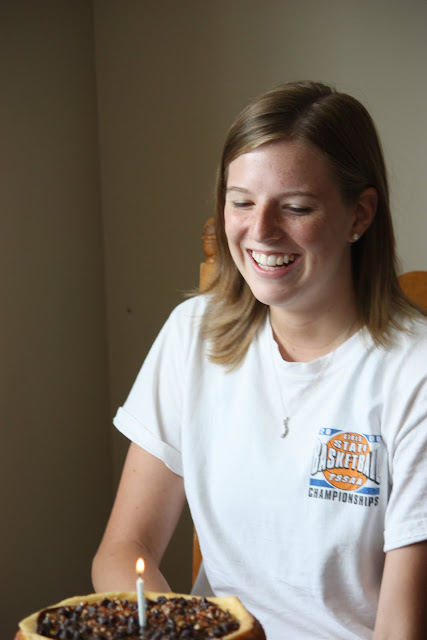 In between football outings, we had a birthday to celebrate.  Since Chelsea wasn't with us on her actual birthday, we had to make sure we still celebrated her special day.  She chose a turtle cheesecake for her birthday dessert.  I was pleased with the new recipe.  I'll have to share it with you in a few days.  All of the fun, visiting, football, cooking, and eating made for one tired momma.  We were going to try and find a church this Sunday, but we were all wiped out from the previous days events.  I did take an hour long bubble bath on Sunday afternoon!  It was heavenly!

grace and peace,
julie
Posted by TnFullQuiver at 9:37 AM

An hour long bubble bath in your amazing jacuzzi tub! :)

And you forgot to mention all the baking that you did for us! Thank you so much! The banana bread is to die for! :)

I'm glad to hear your boys are settling into their new teams:) If I had a tub like that, oh my, I'd be soaking away too, LOL!!!! Enjoy your day Julie!

Paige,
I am glad you enjoyed the goodies. Our entire dinner meal for tonight came from your Dad's garden! Well, except for the corn muffins. I enjoyed seeing your mom and dad. Zach has grown so much, and he plays guitar wonderfully! Next time, I pray that we get to see you and meet your husband. The recipe for the banana bread is on my side bar. It is best if you let it sit a day or two before eating, but we didn't have that long! love ya!!

Carmen,
I soaked so long that my husband kept checking on me to make sure I hadn't drowned! It was glorious. Enjoy your day too!!!
grace and peace,
julie