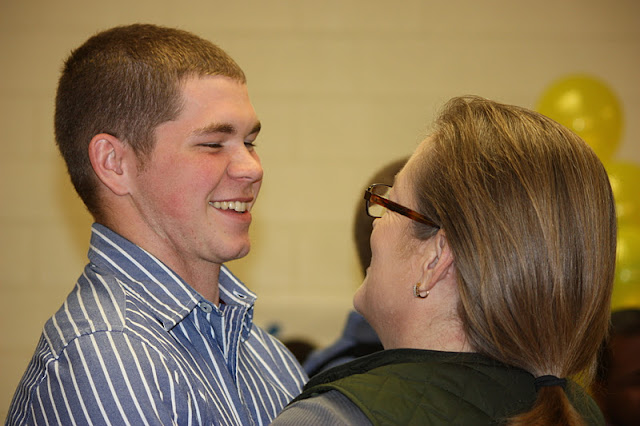 When we moved to Rhea County a little over a year and a half ago, I spent many hours bemoaning the fact that my children would not have close relationships with other adults in their lives.  I especially felt sad about Josh because he was caught in between.  He had those people in Greene County...  the ones that could love on him and scold him in the same breath.  I never expected him to find those kind of adults here in our new home.  I didn't think Josh would allow himself to develop those kinds of relationships, and I was even more concerned that the people in Rhea County wouldn't take the time to build those kind of relationships with my kids.

I am happy to report that I was wrong.  People have not only learned our names, but they have developed relationships with our kids.  Good relationships that allow them to love on our children and to scold them when necessary.  I was reminded of this last night as we helped with a large baseball fundraiser.  I had the opportunity to talk with several people that my kids know better than I do.  These people know my kids at their best, but they have also seen them making mistakes.  In other words, they know the good and the bad!  I am so thankful for the people that have poured into my kids' lives.  Michael and I pour everything we have to give, but then other people come in and add more, which adds something special to the mix.

As we listened last night to Cory Gearrin, a native of Rhea County who plays baseball for the Atlanta Braves, I realized just how much others have an input into our children.  Cory took the time to honor his own parents, but he also took the time to share just how much the other people of Rhea County had influenced him.  The teachers, coaches, parents of his friends, as well as others helped grow him into the man that he is today.

The above picture says it all for my son. She is a mom to one of Joshua's friends.  She took the time to get to know Josh.  She has fed him, laughed with him, cared about him, and yes, scolded him when needed.  She has poured into him good things as well as good memories.  By the way, she is just one of many that have done the same thing for him.

I wish I had known the outcome a year and a half ago when we left on this journey.  I wouldn't have shed so many tears about moving, and I wouldn't have made such a long list of things  that concerned me.

I am thankful that I have one less thing to worry about...

grace and peace,
julie
Posted by TnFullQuiver at 9:22 AM

That is wonderful Julie! Being an only child, my son had quite a few adults in his life and it really does make a wonderful difference, they have some good knowledge to share:)

That's wonderful. I love that picture! We haven't become very close with people here in Idaho. Not like we'd like. We're praying that should we move to TN like we believe God is directing us to in the next couple of years that we can develop those kinds of relationships as well. I'm so happy that you guys are happy there!!

Carmen,
Hope your week is going better. I am sorry about the loss of your bunny. I know how much pets mean to us!

Kristy,
Well, Rhea County is full of people ready to become friends/family. Wish your move to TN could be here! I hope it all works out for you. Keep me posted about your progress.